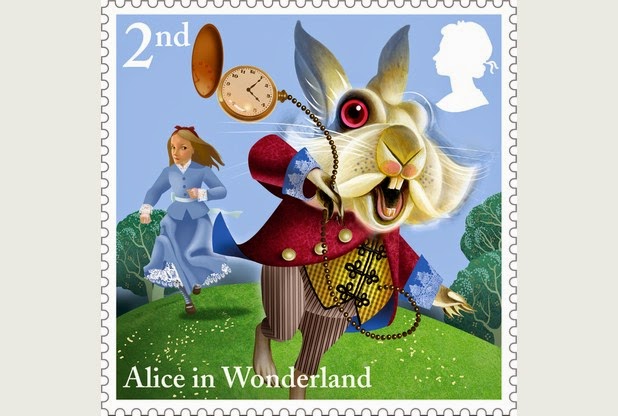 England’s Bath Chronicle reports, “The Royal Mail is issuing a set of Alice in Wonderland stamps to celebrate the 150th anniversary of the publication of the Lewis Carroll’s classic children’s tale.”

According to the paper’s website, “2015 marks the 150th anniversary of the publication of Alice’s Adventures in Wonderland, one of the most enduring stories in the history children’s literature.
To celebrate the anniversary, Royal Mail commissioned award-winning illustrator Grahame Baker-Smith, to illustrate ten key scenes from the story.The White Rabbit, the Cheshire Cat and Alice herself are among the characters depicted in the stamps.”

It goes on to say, “To coincide with their launch, Walker Books will be publishing a three-dimensional gift edition book with pages that fold out and artwork from the stamps teamed with excerpts from the original book.’