Jimi Hendrix To Be Honored on U.S. Postage Stamp 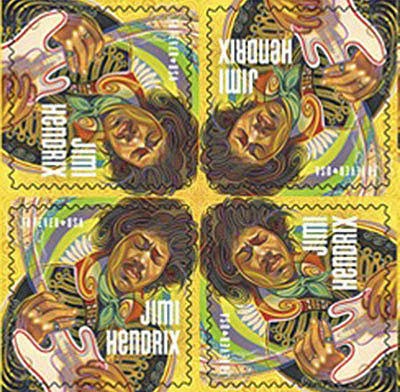 A stamp featuring music icon Jimi Hendrix will be issued March 13 in Austin, Texas according to an article  by Jay Bigalke that appeared in Linn’s Stamp News.

Jay pens, “The pane of 16 stamps will look like previous Music Icons issues, but the arrangement of the individual stamps is different. A block of four of the Hendrix stamp, cropped from a full pane, is shown here to display the unusual “kaleidoscope” layout. Four such blocks comprise the pane, with pane selvage and backing that resembles a 45rpm record.”