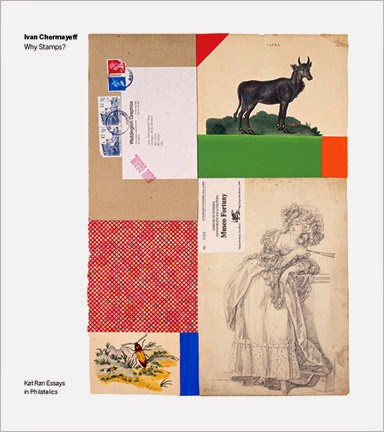 The Kat Ran Press has  released a new book, Why Stamps? by Ivan Chermayeff.

As part of its “Essays in Philatelics”series it focuses on the philatelic work of type and graphic designers. Other books in the series include Designing the Mentoring Stamp,  Notes on Postage Stamps, Postage Stamps and Philatelic Atrocities.

According to a company press release,  “A good graphic designer pays attention to small things, and there are few things smaller than stamps. Ivan Chermayeff has been paying attention. For almost fifty years the acclaimed graphic designer has been making collages—and in those collages stamps and mail have played an important role. Envelopes are heads. Stamps are eyes and lips. However, one could be forgiven for never having noticed this, as the whole in Chermayeff’s collages is greater than the parts.

“In Why Stamps? Chermayeff calls attention to the parts with a brief essay on postage stamps and a selection of fourteen collages which use stamps and mail to the best possible effect. Also shown are two of Chermayeff’s smallest cut-paper collages: Stamps for the USPS and Royal Mail.”